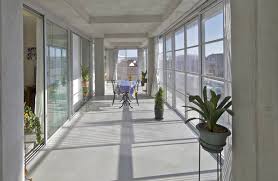 They did it. Lacaton & Vassal1 yesterday at last received the EU Mies van der Rohe Award for the best European work of 2019, for their remodelling of a 530-dwelling social housing block in Bordeaux. Rarely have an architecture award’s objectives been so clearly reflected in the winning design. The jury was spoilt for arguments with which to justify the verdict – despite the extremely high level of all the works competing in this biennial competition.

The two French architects, who have successfully cultivated and maintained a very consistent line of research since they completed their Latapie House in 1993, are admirably coherent in all their designs. However, despite having managed to get several works shortlisted for the EU Mies Award – 2 nominations, 2 finalists and 7 proposals since 1996 -, it has taken them 23 years to pick up this first prize. It’s never too late if the “building” is a good one!

“User-focussed” architecture.  That’s not just an empty set phrase, churned out because it’s what others want to hear. Quite the contrary. Lacaton & Vassal teach by example, and that’s why they’re so convincing. Their talent lies more in what you can’t see than in what you can see. They have a prodigious capacity to grasp all the implications of sites and commissions, i.e., the circumstances of each project. They study climate, noise, vegetation, local housing customs and the brief. But in those respects, the same can be said of many architects. The distinguishing thing about Lacaton & Vassal is the way they interpret pre-existing situations and come up with imaginative housing models to improve locations and needs programmes. Their criterium is always to offer a bonus, that little bit of “extra space” that enhances buildings with unexpected  additions.

They first started doing that in their single-family dwellings, “deforming” the rigid austerity of the domestic programme by juxtapositioning an “extra space” in the form of a “conservatory”, an enclosed extension to the living area capable of regulating and improving the home’s comfort. And that was how their whole discourse came into being. There were no pretentious pontifications about energy efficiency, like those which are used to justify a lot of today’s poor architecture.

Those added spaces, which were sometimes – like in the Latapie House (1993), the house in Coutras (2000), and the homes in Mulhouse (2005) – as big as the house itself, showed the architects how to meet their users’ most human needs. And it was the application of this “extra space” strategy to social housing, in this case some housing blocks built in Bordeaux during the developmentalist period, that finally won them the prize yesterday.

Their winning project was the mise-en-scène of their most ambitious (theoretical) project:  PLUS2. Commissioned by the French Ministry of Communication and Culture in 2004, their research into the obsolescence of housing in areas on the outskirts of French cities concluded that existing housing should be refurbished and made use of.  Despite the vested interests generated, the best bet was (and is) to recycle such buildings rather than knocking them down, but to do that an architectural project had to deliver a noticeable improvement in each user’s home: an improvement that would be worth the effort. And theirs did.

The addition of a climatic buffer zone, a simple,  continuous gallery running around each apartment, generated a new spatial relationship between rooms and improved the whole block’s energy behaviour. With the full collaboration of all the agents involved (administrative authorities, architects and users), each dwelling was renovated for around 50,000€. This was made possible by an increase in the buildable potential of the blocks, which contributed directly to improving human living standards by augmenting the meagre number of rooms available and establishing a much more respectable relationship with the urban environment. Everyone is a winner thanks to this joint commitment.

The winning work would have to be a model for any city wishing to responsibly address the renewal of urban and architectural quality in consolidated suburban areas. It was a question of making the regulations more flexible and going beyond the simple “green” discourse that exalts “intelligent buildings” – buildings that completely overlook the intelligence of their users. And it needed to be done to turn those poorly designed buildings dating back more than half a century into a sustainable heritage that we can’t afford to abandon, not even because the construction industry needs to build brand new housing blocks . Alternatives do exist, and this project in Bordeaux is a shining example.  Take note, you politicians, you who now – with the whiff of a general election in the air – seem so concerned about your constituents. Be brave and allow more “special status zones” like this in our cities.